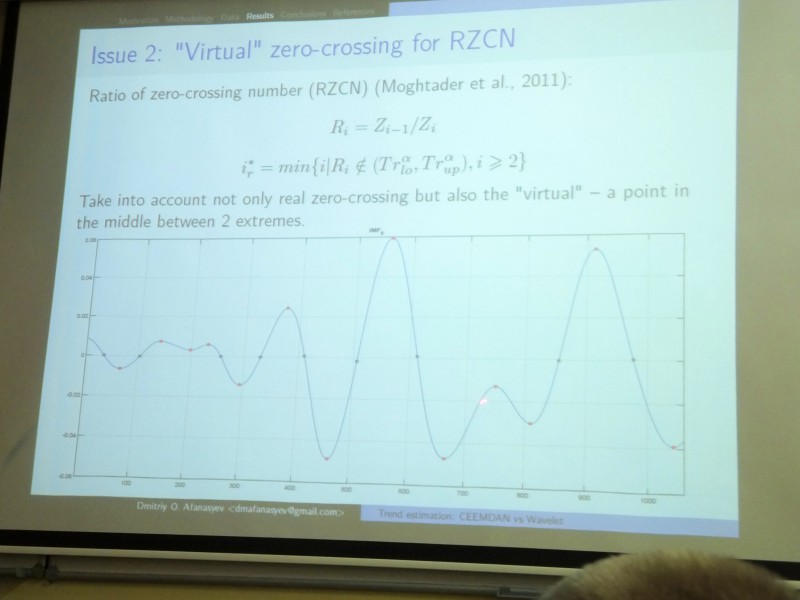 Day two of the 2nd International conference on Modern Econometric Tools and Application at the Higher School of Economics in Nizhny Novgorod.

Mikhail Zitlukhin from Steklov Mathematical Institute in Moscow addresses a question which is relevant for any actor in the financial market: How to invest money optimally? The common approach is to compare scores assigned to different investment strategies. From that you choose an optimal portfolio. Now, investment decisions face a tradeoff between profit and uncertainty. The objective of financial market research has been to provide a good answer to the question how to measure the trade-off. The Sharpe Ratio is a well-known measure. The expected return, EX, is divided by standard deviation of returns (square-root of Var(X)): S(X) = EX / Var(X)^0.5. A basic assumption is that future returns are known. The Sharpe Ratio is famous because it is easy to understand, and good for practice. But it has disadvantages: not monotone, symmetric, and not flexible. And it is just one measure. Mikhail pointed out that we want to have a family of performance measures, not just one. Mikhail contributes to the literature by defining a simple monotonic profit-to-uncertainty ratio. This approach builds on Theory of coherent risk Measures, the concept of a worst scenario expectation (what is the profit in the worst case), and the logic of Average Value at Risk, among others.

Svetlana Makarova from University College London and co-authors proposed a new test for evaluating economic policy effects. The traditional approach to evaluation is to include some variables representing policy action into the equations. Svetlana and co-authors start from two assumptions which contradict the traditional logic: The time lag between policy action and impact on the economic process is not known well enough. And past decisions might not affect the mean value of the process but its stochastic, unpredictable part. An example is targeting inflation. Svetlana use ARMA-GARCH models to inform an alternative testing strategy.

Kirill Furmanov from Higher School of Economics and his co-author presented results from research on a model for mortgage survival. The response variables are timing of default (3 months without payment), pre-termination (both are modeled separately). They exploit a data set with some 280,000 observations, so large sample trap is an issue. Covariates include debtors and mortgage characteristics. The focus of the paper is on the methodology of comparing survival or life time models. However, they find no satisfactory measure of predictive accuracy of survival model.

And a last snapshot, because this is the kind of topic everybody is interested in: Evgenii Gilenko from St. Petersburg State University and Elena Mironova from University of Amsterdam investigated whether items like gender, driving experience, and even car color should be reflected in future tariff formulation of Russian Motor Own Damage insurances (pictured). So far, mostly driver’s age, car brand and car age and prior claim are reflected in tariff calculation. The Russian car insurance market is a very competitive one, due to recent Rouble deprecation prices for foreign car parts have skyrocketed, while profitability of insurance products has sharply decreased accordingly. Exploiting a dataset of some 3,000 contracts they found no significant effects of driver’s gender on damage claim frequency. Nonetheless the insurance company where the data come from introduced a discount for female clients. The reasoning was that women tend to cheat less, and the claim severity is lower compared to male peers. (Footnote: In the European Union unisex nowadays triumphs over such reasonable nuances. It is not allowed anymore to (positively) discriminate insurance customers based on gender characteristics).