Don’t call it just Novgorod, our guide advised me. You can say Nizhny, but just Novgorod is wrong. Nizhny has always been ‘the city’. The meaning is that, founded in 1211, it has always meant to be a city; it was not created just as a settlement. In 1932 Stalin decided to rename the City into Gorky, i.e. it was given the name of the famous Russian writer. Gorky himself, still alive at that time strictly opposed the idea. And believe it or not, soon after the city turned from Nizhny Novgorod into Gorky, Gorky started to fell ill. Bad Karma. Eventually the city was renamed again in 1991. (So Nizhny Novgorod = Gorky = Nizhny Novgorod; I will use both terms interchangeably). 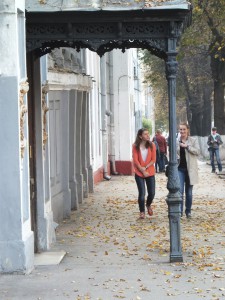 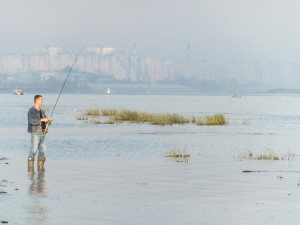 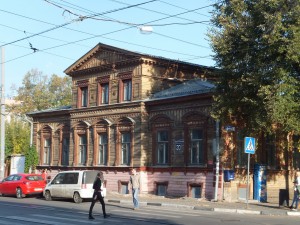 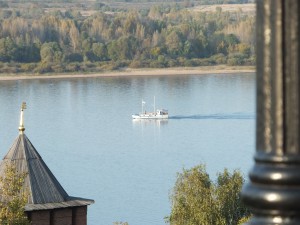 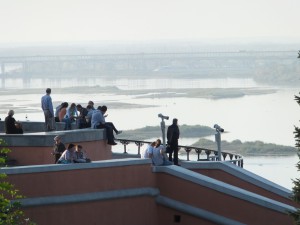 In the Great Patriotic War 1941-1945 Gorky made highly significant contributions to the production of military equipment. One out of 2 submarines, every third tank, including famous T-34, and one out of four airplanes were produced in the cities’ numerous factories. German Wehrmacht never reached the City (Plan Barbarossa to capture Moscow in a Blitzkrieg failed already in 1941 as a result of the battle of Moscow), but military planes did; the city was bombarded 43 times.

A large chunk of the magic of Nizhny derives from the fact that the city is located on the mighty Volga River, which is the largest river in Europe, some 3,500 km long. And Volga River meets with the river Oka, some 1,500 km long. The location where they meet is a must see. You can easily do so by visiting the Kremlin. 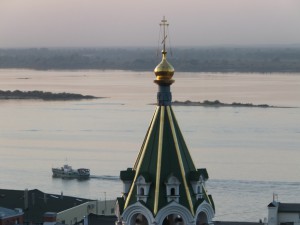 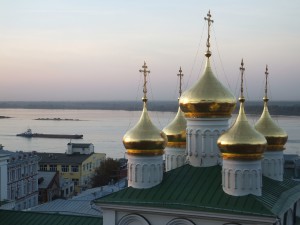 Due to its military importance the Gorky was a closed city until 1991, i.e. it was invisible to foreign tourist. It was not displayed on foreign maps. And cruisers on the Volga River passed the City at night, when most tourists were sleeping.

Nizhny consists of two parts. The Kremlin, the old city, and the Higher School of Economics are located in the first one on the one side of the River Oka. The second part, industrial part of the City on the other side of the River Oka, was only merged with Nizhny in 1920. Nizhny is the 5th largest city of Russia, with some 1.5 registered inhabitants (Gastarbeiter and sans-papier come on top of that). Though Nizhny has a Metro, the public transportation system strongly relies on public buses, and to some extent tramways. In fact the first Tramway in Russia was established in Nizhny in 1896. They proudly display this fact on the railcars of a particular line. Nizhny will host some of the matches of the Soccer World Championships in 2018. This is expected to lead to a large increase in infrastructure investment in the years to come.

Until 1917 Nizhny was famous for its international fair. Back then Moscow was usually said to be the heart of Russia, St. Petersburg was the Brain (until today, a lot of senior federal decision makers graduated from St. Petersburg, just take the President, and the Prime minister as examples) and Nizhny was the pocket or the valet (because Nizhny provide so much goods, and merchants made a lot of money there). The fair was closed in 1917, reopened again 1922-1930 during a period of economic policy experiments, and then again closed.

So Nizhny is worth a trip. You can reach the City by bullet speed train within 3 h 48 minutes from Moscow Kurskaya. Fast, clean, safe, still reasonable price. And no boarding time.