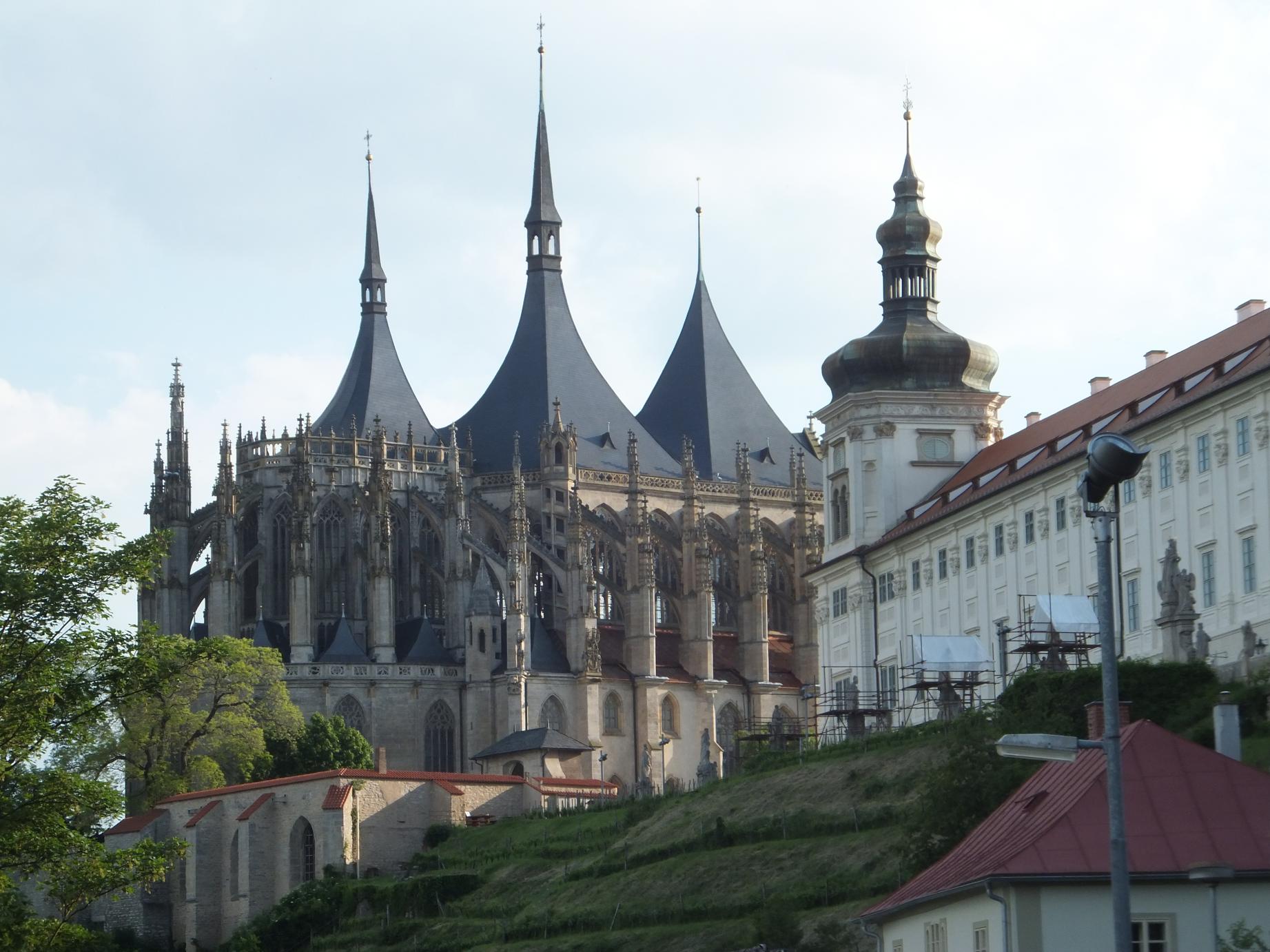 Kutna Hora, Kuttenberg in German, a small town of some 40,000 people 70km east of Prague, the Czech capital, benefited from two assets in the past. The first asset were silver ore mines that were detected in the 13th century and exploited until the 16th century. Open pit in the beginning, later on in mine tunnels that where up to 600 metres deep.

The trace of the silver ore depicts social strata and illustrates mediaval economic and social history in one of Europe’s richest region. Miners formed the lower strata in the hierarchy. As today, miners had an extremly risky and exhausting job. Life expectancy of a miner was 26 years. Women in the town were 3-4 times widows during their life course. The salary was 7-8 groschen, a currency unit, per week. It took 30 minutes to slide down into the Stollen, and 2-3 hours to climb up after the shift was over; as you probably guess correctly, this was unpaid overtime work.

Silver coin minters above the surface were better-off. They were well-paid experts who minted up to 2,000 silver coins per day from the natural resources digged by their underdog peers below the ground. To become a master you needed to pass an examination, the task was to mint 1,000 coins in a row without a single mistake. A 6kg hammer rushed down on a small oval made of 90% silver blended with 10% copper (unlike gold, silver is a soft material, copper is required to add stability to the coins). Prisoners assistet the minters by holding the upper part of a device that fixed the coin, this was a risky task, especially when minters were tired after several hours; a significant number of prisoners were even deadly injured. If a prisoner was still alive after three months of this sentence, he reportedly was released because it was <<God’s will>>. Minters earn up to 1 Taler per day, also to keep them from stealing money. These anectodes depict the inequality part in the Bohemian rapsody.

Local rivalry is another part of the story. Kutna Hora competed for reputation, economic and religious power with nearby Prague. Next to Saint Barbara Cathedral, a tremendous piece of architecture pictured below, is a collection of statues that copycatted the ones on Prague’s Charles Bridge. Prague had a Jesuit School hence Kutna Hora also needed to have one. Local elites successfully lobbied King Wenzel II., who closed all 17 other silver mints across Czech; Kutna Hora became the central and only one.
The silver ore mines exhausted and were subsequently flooded in the 16th century.

The second big asset and source of the city’s mediaval prosperity was a handful of soil taken in Jerusalem. A local noble man spread this handfull soil over a piece of land that he donated to a group of monks, the legend goes – Kutna Hora thus created an image of a second Jerusalem. A huge cemetry accompagnied the monastry and rich and noble men from across the kingdom made large donations in return for the right to be burried there.

What Kutna Hora lacked however was an university. This brings is back to Prague and its famous Charles University. Established in 1356 it is the oldest University in Continental Europe. And its Faculty of Sciences marvellously hosted the 27th annual NispaCee conference throughout last week (May 23-26, 2019).
I will try to summarize some of the research evidence on local government presented at the event in a subsequent post.

Pictured above: Cathedral St. Barbara, 1388-1905 reconstruction on neogothic style, it took 500 yrs to finish the building; financial dire times, and Hussite wars caused delay, among others