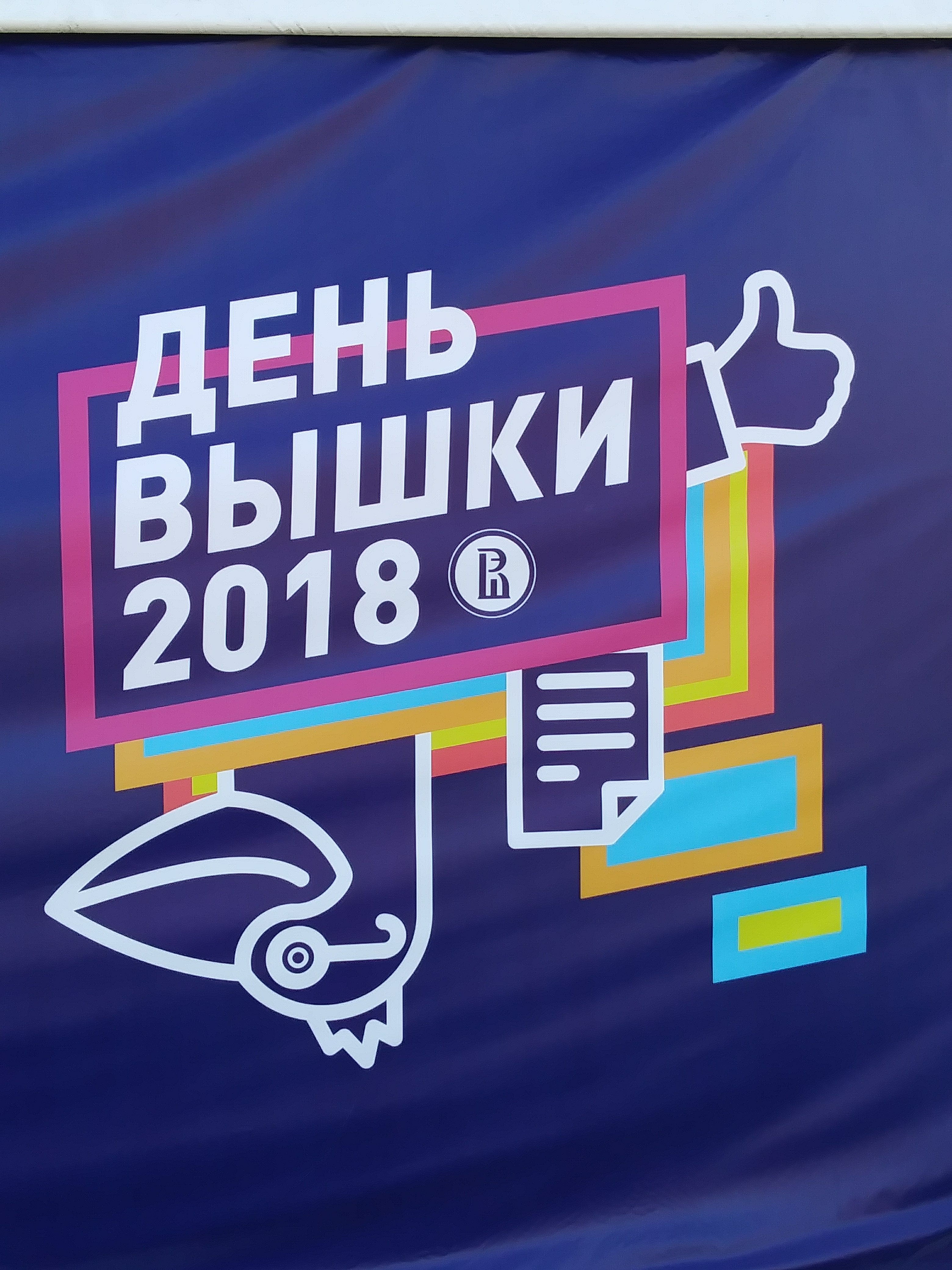 Below is a talk that I delivered today at Higher School of Economics (HSE) Day 2018 in Moscow’s famous Gorky Park.

What is the meaning of life?

I recently finished reading the autobiography of the famous Austrian psychologist Viktor Frankl. Frankl is famous among applied psychologists, he invented logotherapy, a theory and counseling approach about what motivates people.

Frankl experienced a, say, more than challenging life, if not to say, a multi-year nightmare. Being a Jewish doctor in Vienna in the 1930ies, he suffered from the Fascist regime. He survived the holocaust and four concentration camps, including Auschwitz. But his wife, his brother and his parents died or were killed in a concentration camp.

A man who lost almost his whole family during the holocaust, what will be his answer to the question: What is the meaning of life? Viktor Frankl’s response was: Identifying a purpose in life.

Frankl established the notion that identifying a purpose in life is crucial for an individual’s well-being. His bestselling book was “Man’s search for meaning”. Frankl further argued that a meaningful life requires two ingredients: one’s desire to benefit other people and acting beyond pure self-interest. Taking care about one’s both social and natural environment motivates a meaningful life. In other words we should behave in a sustainable manner.

Viktor Frankl’s lesson leads us to the broader concept of sustainability. More formally, sustainability is a logic of action aimed at a careful use of resources that secures the well-being of current and future generations. The point I want to make here is that sustainability not only ensures that this world will be a life-worthy place for our kids. It will also satisfy you and me — right here and right now, because it satisfies man’s search for meaning in life.

How does this relate to government and public administration? To answer this question let us take a step back. In this academic year I am teaching a course that deals with management and sustainability in the public sector. We will study the role of the public sector in promoting sustainable development. It is beyond the scope of today’s talk to summarize all the evidence on this topic. Instead, I will highlight the two faces of the public sector when it comes to sustainability, the ugly and grey one, and the professional, the green one.

It is an undisputable fact that the global population consumes more natural resources, such as water, oxygen, soil, than the global ecosystem can regenerate. And we are producing more carbon wastes than the global ecosystem can absorb. Our ecological footprint, a population’s demand for resources, by far exceeds ecosystems’ bio capacity, the supply of those resources. In other words, human mankind is running an ecological deficit. Earth Overshoot Day is a common measurement of this deficit. In 2018 Earth Overshoot Day was on 1st of August which is almost two months earlier than in the early 1990ies. We are more far away from carefully using resources than ever.

The job of government and administration is to improve the well-being of citizens. Earth Overshoot Day demonstrates that policy makers need to regulate economic activities. Environmental protection and sustainability receive most attention on a global level. In 2005 policy leaders agreed on the UN Sustainable Development Goals. They include a commitment to end hunger and starvation, and to balance ecological footprint and bio capacity by 2030. Elected decision makers set environmental policy goals, public administration run policy programs to achieve those goals. Policy makers regulate economic activities and peoples’ behavior.

For example, in order to cut greenhouse gas emissions and to increase energy efficiency the European Union in 2005 launched its Emission Trading Scheme. Essentially factories will need to pay for emitting greenhouses gases. The underlying idea is that if you have to pay for emissions you will seek to reduce them.

Another example is air pollution. Polluted air is the ‘silent killer No. 1’according to the World Health Organization (WHO). In order to secure public health policy makers set an annual limit value for nitrogen dioxide of 40 microgram per cubic metre (µg/m3).

On the one hand, the public sector acts as a promoter of sustainable development.

There is plenty of evidence where governments fail to promote the well-being of their citizens, however. Germany serves as an excellent example for policy failure and regulatory capture. People in several well-known German cities suffer from polluted air. Berlin, München, Düsseldorf, Hamburg, or Köln regularly exceed critical values set by the European Union in 2010. Diesel-engine motor vehicles are the major source for air pollution; they are responsible for 70% of nitrogen dioxide emission (NO2) in Germany up from 15% twenty years ago (2000). There are good reasons to ban or at least regulate this technology.

Federal government, including Chancellor Merkel, and most state governments tend to ignore the problem however. The state prime minister of the largest German state recently said that he considers diesel-bans to be unreasonable and unlawful.[1] German politicians oppose a sustainable transport policy. Policy makers continuously jeopardize public health of the people. Why?

The first explanation centers around regulatory capture: Regulatory capture means that lobbyists and well-organized interest groups capture the state. Germany has the world’s hugest and most profitable car industry. Being a huge taxpayer and donor to almost all political parties Volkswagen, Mercedes-Benz and BMW heavily lobby and successfully influence policy-making in Germany and the European Union. Regulatory agencies, such as the Federal Office for Motor Traffic (Kraftfahrtbundesamt, KBA) in Germany fail to act in the public interest.

In his 1965 seminal book “The Logic of Collective Action” Mancur Olson argued that small self-serving interest groups have a stronger voice compared to a diverse group of people. Politicians seek for reelection. German car makers provide jobs to hundreds of thousands of skilled engineering workers, either in their own factories, or in the supplying industry. Unions are doing a good job in organizing those workers and voters to combat tough regulation of the car maker industry. But it difficult to organize the millions of people that suffer from polluted air.

In 2018 the European Commission sued to court Germany and five other countries. This imposed at least some pressure to act. In spring 2018 the German federal administrative court ruled that municipalities in Germany may impose bans on diesel-powered cars to combat polluted air. Hamburg was the first city to impose such a ban, though a very limited one. Two inner-city routes are now closed to older diesel-engine cars. It is questionable whether banning particular groups of cars from entering cities is a useful attempt to improve air-quality for community members.

(The idea of banning dirty cars from entering city centers is not novel to Germany. Imposing city bans on dirty cars is a practice that has been in operation since 2007. Since then local governments are allowed to establish so called “low emission zones”, in which heavy polluters are not allowed to enter. Those low emission zones proved to be an inefficient policy tool however.)

But reality is not just black and white. There are several shades of green. At the local level public policy makers act as frontrunners and role models for sustainable behavior. My example here is urban transportation. E-mobility is the only sustainable approach to urban transportation in the 21th century. For example, Berlin, Germany’s capital, currently runs a pilot project with a fleet of 25 e-buses. In another German city, Mainz, state government funds the replacement of diesel-engine buses by e-buses.

Yet another approach to e-mobility is trolley coaches. Moscow has been using trolley coaches since 1933. In the Western world trolley coaches and the supporting power supply lines have been demolished during the 1960ies and 1970ies. Urban planners now admit that this was a huge mistake. E-buses now experience a comeback.

Modern public managers will need to shift their attention from protecting an over-subsidized car industry to developing comprehensive and integrated public transportation systems. Public e-mobility is the future of urban transportation. Uber is NOT a solution to polluted air, and congestion. In US cities where Uber operates, its service has increased, not reduced, the volume of traffic, a recent study demonstrates.

This brings us back to the question “What is the meaning of life?”. Sustainability is much about psychology. Sustainability starts at the individual level. At the end of the day it is your choice: whether to or not to ride the metro or by Yandex.Taxi, whether or not reject a plastic bag when shopping. It is up to you to make a difference.

You think that sustainability does not pay? There you are mistaken. There is a business case for Corporate Sustainability. Sustainable investments can drive financial performance. Return on invest (ROI) is 5% higher for companies that put their money into responsible investments compared to those who do not account for responsibility when making an investment decision, a recent meta-study from Oxford reports (Clark, Feiner, Viehs, 2015; Khan, Serafeim, Yoon, 2015)[2][3]. And the risk is lower compared to orthodox investments.

But this argument is based on an extrinsic, financial motivation, increasing profit. Intrinsic motivation will form a more solid base for sustainability. You will not only help to secure the future of your kids; it will make you feel better right now, too.

[2] From the Stockholder to the Stakeholder. How Sustainability Can Drive Financial Outperformance. https://arabesque.com/research/From_the_stockholder_to_the_stakeholder_web.pdf 2018-09-11.