I am very proud that I was invited to give a Open Air lecture at this years HSE Day in Moscow’s famous Gorky Park. This year I talked about work satisfaction of Russian civil servants. And I presented new survey evidence that I collected last year.

I have been living and working in Moscow for two and a half years. Before I came here I remembered all the negative perceptions about Russian bureaucracy. And I experienced them also when arrived; with the customs office for example. But soon I saw and recognized that Moscow is a huge, dynamic city. I have been witnessing plenty of innovative things and practices, in large companies and small businesses and also in the public sector. Moscow is changing to the better, every single day. This is my honest view. I see new metro stations; I am using an entirely new rapid-transport system, MZK, and a see a lot of other small steps to make public service delivery more users friendly. Some weeks ago I posted a huge campaigning poster reading that Moscow has been successfully fighting a battle against its own bureaucracy for six years now to make service delivery more convenient for Muscovites. Wow!

On the other hand there is widespread negative perception of civil service. Russia really has an awful bureaucratic tradition, and a lot of its current culture derives from this legacy. People have low confidence in almost any public institution, even the presidential administration; which is kind of strange since trust in the president is at an all-time high. And this was a kind of gap to me, a mismatch. I studied administrative behavior in a couple of research projects here in Russia. And I can compare this evidence with my research results from Europe; where I conducted projects in Germany, Switzerland, England, and Sweden.

In one of my latest research projects I was interested in the question: How satisfied are civil servants in Russia? Citizens’ surveys and public opinion polls tell us whether or not citizens are satisfied. Two weeks ago local elections took place throughout Russia; elections are another indicator for political support and satisfaction. But what do we know about work satisfaction of civil servants themselves? Are they satisfied with their work, pay levels and levels of responsibilities? My research project had the following research questions:

First I will briefly outline the theoretical framework of my analysis. I will hypothesize a number of relationships. I will present the dataset, and some key results. In a final step I will derive some conclusions from my findings.

1. What makes people feeling happy at their workplace?

And what environments make people feel unsatisfied at work? (And why is this relevant?)

A high-quality working environment positively affects the performance and the wellbeing of employees. This in turn links to the performance of the overall organization. Happy employees will help an organization to reach its goals. Without happy employees any business firm, small startup, or government agency will not see innovation and quality in service delivery; but rather burnout, high turnover and low organizational commitment. Have you ever wondered by waiters in Moscow’s cafes at times seem to be rather unmotivated? Their work environment is not supportive; there is often rude tone from the top. So this is what they give in return. There is high turnover. In my pet Schokoladniza, every month there is a new team of waiters.

According to self-determination theory, SDT, each individual has three basic psychological needs: autonomy, relatedness and competence. Competence is a human’s need of being effective in dealing with its environment and master doing something; autonomy means to have some control over one’s own life. And relatedness means to have sound relationships with others. Human nature is adaptive, we are experience dependent. In a basic need supportive environment adaptive human nature “will move toward thriving, wellness, and integrity” (Ryan & Deci, 2017), we will see positive behavioral outcomes, such as prosocial behavior. But in a “context that are overly controlling, rejecting, critical, and negative, or that otherwise frustrate autonomy, relatedness and competence needs, individuals are more likely to become self-focused, defensive, unmotivated, aggressive and antisocial” (Ryan & Deci, 2017).

First, any working environment has to support basic psychological needs (competence, relatedness, autonomy) regardless the working sector (private, non-for-profit, public sector). Second, vocational theory and Person-Job Fit theory assume that an employee experiences satisfaction at work when her or his interests and abilities match the skills required and the opportunities offered by a particular vocation. Holland (1968) proposed that “individuals working in environments matching their interest areas are more satisfied”. A person with an artistic mindset will flourish in an artistic work environment. An extrovert will probably perform well in leadership positions.

Summary 1: A person will experience satisfaction at work in case his working environment supports basic psychological needs (competence, relatedness, autonomy), and, allows him to satisfy his or her personal professional interests, skills and abilities. In turn a working environment that frustrates basic human psychological needs, and does not match the personality, interests, and abilities will make a human being unhappy – in the long run. (We leave aside the discussion that a person may satisfy his or her upper level needs outside the workplace; family obligations, commuting, etc., strongly limit these opportunities anyways). There is a wide range of additional (upper level) psychological needs (achievement motivation, power motivation or altruism and prosocial motivation). People will be satisfied and happy in case their workplace supports these motivations. They will become self-focused, lack motivation, aggressive and antisocial, if not.

2. Are civil servants satisfied by different experiences than business employees are?

Turning to the public sector, what types of personalities are expected to flourish in government jobs? Public sector compensation schemes historically prioritize internal wage equity, modest pay rates, strong nonwage benefit packages, and relative job security. Moreover, the public sector has to address multiple ambiguous and hard-to-measure agency goals (multiplicity of goals). Public policies have to address the society as a whole; programs face difficulties in identifying customers, and segmenting or discriminating among users. Public managers possess limited managerial autonomy and experience high political interference. There is need for consensus in decision making, across agencies, among administrative and political stakeholders.

People who value helping others in relatively stable working relationships should experience satisfaction in public sector employment. In fact, public sector employees self-report higher levels of prosocial motivation, and altruism compared to private sector employees, in a wide range of countries. There is compelling evidence that people are socialized on the job. People adapt to the professional norms and culture of an organization. But this does not weak my argument: We assume that people who are willing “to engage in sacrificial behaviors for the good of others without reciprocal benefits for themselves” (Perry at al. 2015), a type of altruism, experience satisfaction from public sector employment”.

People who seek to support their country (patriotic service), or work for a common good (the public interest) experience satisfaction from public sector employment. They are more likely to report high level of job satisfaction. People who value modest, but stable and relatively secure income, including social benefits experience satisfaction from public sector employment. They are likely to report higher levels of job satisfaction. These assumptions are conditional on a working environment that satisfies the three basic psychological needs (competence, relatedness, autonomy): positive relationships among team members and colleagues, empowerment, encouraging feedback from supervisors, meaningful tasks.

Russia has a distinct culture of bureaucracy. The Soviet legacy: centralized planning economy, highly influential administrators, and extreme hierarchy from top to bottom. Some features have survived, and are still valid in contemporary Russian public administration. We would expect that a working environment with such a legacy attracts people with a strong desire to exert power and influence over others; this motivation is called power motivation (n power). These people experience satisfaction from exerting control; we should report higher levels of job satisfaction. Because public administration also has a historically strong impact on society, we also expect that people with a high level of achievement motivation self-select into the public sector. Having an impact on society will create satisfying experiences. They are more likely to report high level of work satisfaction.

Work satisfaction is a crucial issue in modern public management. But there is limited evidence on work satisfaction among current civil servants in Russia. My study is explorative in nature since it provides unique insight into contemporary civil service workforce.

How satisfied are civil servants in other countries?

In South Korea’s Federal, for example, government employees are quite satisfied according to data from Jesse Campbell and Tobin Im. Their sample mean value of overall work satisfaction is 3.68 on a 1-5 scale, where high values indicate high level of satisfaction.

Do Russian civil servants differ from their counterparts elsewhere in terms of happiness?

15 years ago in 2002/3 Eugene Huskey from Stetson University and Alexander Obolonsky from the Higher School of Economics surveyed civil servants from across different layers of government. Civil servants were rather satisfied with citizens’ interaction, colleagues and the prestige of their jobs. Quite satisfied means that for each dimension at least 50 per cent said there are satisfied. They were rather dissatisfied with job security, personnel policies, and perks (benefits, bonuses). And they were the least satisfied with pay.

I did not survey employees in central government / administration, and in Moscow, but in municipal (local) administration in a southern region of Moscow. The survey was conducted in autumn 2016. About 500 employees took part in the survey. The average respondent is female, 37 years old, and has seven to 15 years of working experience.

Stable income and job security are the strongest attraction of government jobs. A relatively stable and secure income draws people into public sector employment. But this expectation is the one which is satisfied least. Low pay levels create a serious dissatisfaction among civil servants.

I did not ask respondents to indicate their intention to leave their job (turnover intention) or to switch the working sector. But data from Huskey and Obolonsky support this interpretation: While most civil servants were unsatisfied with their salary, a majority expressed high level of satisfaction with citizens’ interaction. Interaction with citizens and customers demonstrates the social impact of one’s own work.

Further items from my survey support this statement. About 80 per cent of respondents perceive public administration employment as a mean to help other people. 65 per cent perceived their job as patriotic service to their motherland. Helping others and patriotic motives are aspects of prosocial motivation.

I began with describing a seemingly mismatch: A lot of new practices, but negative perceptions enriched by personal anecdotal experiences. The survey was motivated by the question “How happy are civil servants themselves?”

Why don’t people leave their workplace for a better one? An alternative interpretation: In a way there is a lock-in effect. In some regions of Russia, public service is a primary employer. The likelihood of finding a better job is relatively low. People stay in their job, express levels of dissatisfaction, but use focus on intrinsic life goals.

One implication for practitioners is to engage civil servants in beneficiary contact. Contact with customers will help to experience social impact, which will raise levels of satisfaction. Moscow’s one stop agency campaign is the right direction of travel.

I received a lot of interesting and inspiring questions from the audience, such as: 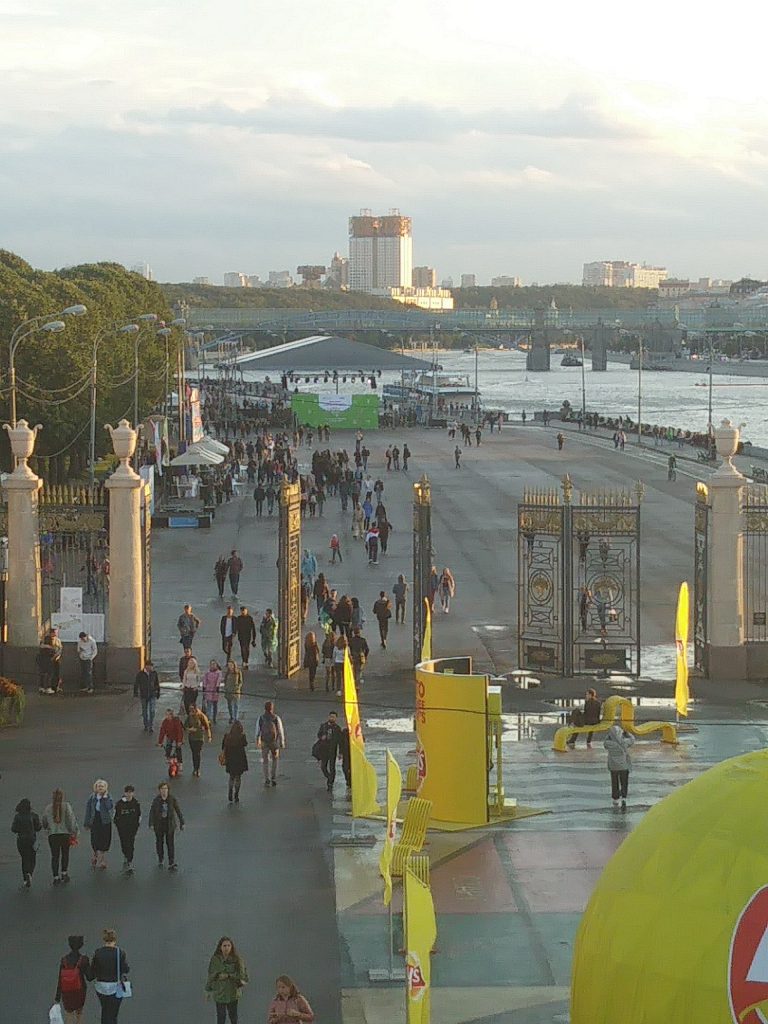